Come As You Aren’t

Are you dressing up for Halloween?  My daughter needed a few finishing touches for her costumes, so off to the mall we went.  There is a school function tomorrow and they requested her costume from last year.  Her Slash costume was the most fun to put together, and minus the piercings it was pretty authentic.  I even spent twenty bucks on a toy guitar that was the same as Slash used, and it lights up.  She’s boring old Cat Woman from a bag this year.  One of the two costumes out there that isn’t slutty.  When did Halloween become “skank a rama”? 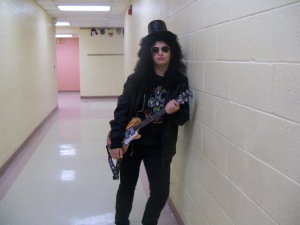 While we were at the mall I decided I needed cheap hoops and bangles for my gypsy costume.  My daughter casually asks “why do you dress up for work, you don’t get candy so why?”  It’s fun that’s why!  Just because we’re grown ups doesn’t mean we can’t dress up.  I borrowed the head scarf and matching sash.  I have a belt with little bells all over it that I found at Goodwill for a dollar.  I knew that it would come in handy. A black broomstick skirt and black boots, well it is work so the flat ones and a black off the shoulder shirt.  This whole costume came together lickety split, it covers all the major body parts, and hardly cost a thing.  Maybe it would be different if I was going out to a bar party, you know ‘creeps dressed up like creeps’.  I’ll pass, I stayed home and carved pumpkins with the kids and cooked the seeds forever.  Well maybe it just felt that way 🙂 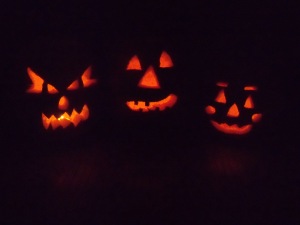 So if you haven’t thought about it, it’s not too late to throw together a costume to wear on Halloween.  Go buy some wings and be a work fairy, those things do wonders for keeping people out of your personal space.  Get a sheet and cut a lot of holes in it and be Charlie Brown.  It doesn’t have to be expensive to participate in the holiday that is the most fun.  So get out there and come as you aren’t!

I am just a woman finally accepting that I was never meant to be in the box. I don't fit into any stereotypes, please don't try and label me, that doesn't work either. I am embracing my uniqueness in ways that are new and challenging to me, so that I may continue to grow and never stop learning.
View all posts by dragonflyzia →
This entry was posted in life and tagged bar, boots, cat woman, charlie brown, costumes, creeps, fairy, gypsy, Halloween, pumpkins, seeds, slash. Bookmark the permalink.