I know I am tired of stressing about this test and I am sure that you are tired of hearing about it!! Tomorrow is the big day, so fingers crossed. The girl and I actually just got back from the trial run drive. That is one less thing that I have to worry about, except for that bridge…..it was horrible.

That bridge was short but scary and I didn’t even see it coming until I was on it. The pit in my stomach lasted until miles later. It’s just one of those things, I don’t want to drive over it, but I have to…there is no other choice. The drive to the test site took 50 minutes to get there and 35 minutes to get home. Can you guess which time I drove the speed limit since I didn’t know where I was going?

Everybody has been super supportive with texts and phone calls,  hugs and even chocolate…..

I wish I had as much confidence in myself as everybody else does. I had the day off to try and absorb as much as possible. Only time will tell.

Later on the home front…….

We have the cutest fuzzy little baby robin in our fence….. 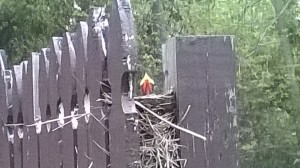 He looks so hungry! 🙂 The girl and I were worried about mamma robin coming after us while we were trying to sneak a peak….but she just watched.

I started ripping stuff out of the bathroom and I am working on it this weekend….no more excuses. I have wanted to do that room for two years now, I have had the paint for a year. Maybe I won’t hate that room so much when I am done? CM has the biggest investment in my penny floor, although I don’t think I will get that much done this weekend.

It’s all about moving forward…..this girl is tired of standing still!!!….Zia

I am just a woman finally accepting that I was never meant to be in the box. I don't fit into any stereotypes, please don't try and label me, that doesn't work either. I am embracing my uniqueness in ways that are new and challenging to me, so that I may continue to grow and never stop learning.
View all posts by dragonflyzia →
This entry was posted in life and tagged ABO, baby, bathroom, bridge, drive, moving forward, new beginnings, procrastinate, road trip, robin, test. Bookmark the permalink.