Most of today was spent going through things in storage, purging and organizing. Everything I do from here on out is just preparing.

The girl is going to need to repaint her dressers (the ones from my childhood) into one color. She has the fun multi color room right now, she picked a bright one….but it’s just one color this time. 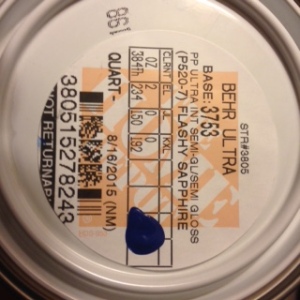 This photo is of one the girl’s dressers (ours still has three drawers) that someone upcycled. Back in the day it came in yellow, mint green and light blue, mine was blue. The pieces in my room are in between a white and a cream, the girl likes a little more color.

My favorite shower curtain that I have ever owned needs to retire. It was so me….

I never thought to look at the tag to see if it was dry clean only or not…..who makes a dry clean only shower curtain? It has lasted for many years but now there are tears in it and spots that won’t come out. The girl wants to pick the next one and that’s fine but she has to pick one that will go with my Ophelia picture.

In between killing spiders, organizing and purging I picked some tomatoes from my last garden.

I will miss that, I guess I could do one or two plants in a pot? I don’t even know where I am moving to yet…..

My cousin was a super trooper today, not only did he move the dresser that I asked him to….but he moved the huge and heavy computer armoire that the boy purchased for only $20.00. I still can’t believe that she let him have it for that….just crazy! One of the steps broke when they were moving it into his room, thank goodness nobody was hurt….but I can’t wait to get out of here!

If I had the money and the place…I would be gone tomorrow…but I don’t and I think that I have a little time, hopefully until November.   The ball is dropping, I guess we will see where it lands……Zia

I am just a woman finally accepting that I was never meant to be in the box. I don't fit into any stereotypes, please don't try and label me, that doesn't work either. I am embracing my uniqueness in ways that are new and challenging to me, so that I may continue to grow and never stop learning.
View all posts by dragonflyzia →
This entry was posted in life and tagged daughter, dresser, dropping the ball, dry clean only, family, garden, letting go, money, Ophelia, shower curtain, son, trust, Waterhouse. Bookmark the permalink.