Today was my normal “rush rush” Saturday only I rushed at new places. Since my sister in law insisted on having my brother’s birthday dinner tomorrow I had to come up with something quick.  His birthday isn’t until Friday and I wasn’t prepared. He doesn’t want anything or need anything so instead of a gift card to Lowes or Sears I drove out to a local winery that he frequents and bought him a bottle of wine.  We set a limit of $25.00 for birthdays and the wine was $27.00 so it was close.

PT and I are going to make some fairy jars after breakfast tomorrow so the girl and I stopped at Hobby Lobby to get an embellishment or two as well as some foam brushes for the mod podge. I have to make sure that I get up early tomorrow to look in the out building for more supplies and grab some jars from the basement.

My favorite local coffee shop is now only six minutes away instead of twenty six minutes away. I love the new location and I stopped for my Saturday coffee and picked up some gift cards for my aunt and uncle. His birthday is today and my aunt’s was the end of last month. With the winter weather it’s hard to make the time for a drive by.

Speaking of weather it was a crazy 65 degrees here today. If we didn’t break a record…. we tied one, and it was very windy which helped dry things up. It didn’t help my tree anxiety, but it all ended well. 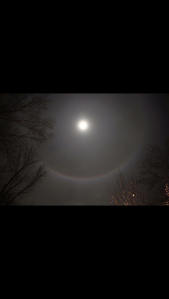 The moon the other night was amazing and the rainbow ring was caused by ice crystals? That’s what they said on the news so maybe it’s true. The girl and I also stopped at the home and garden show on Friday night. It was a much faster walk through when you know you won’t be doing anything to your house. Still….it was free and something to do….and there were fresh spring flowers. 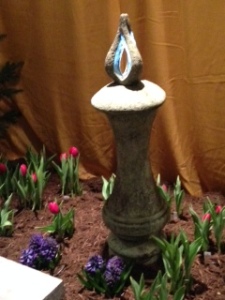 Work wasn’t too bad tonight, it was a lot of party tables. My first table was a ten top and my last was a ten top and I had a few small ones in between. The last ten was seated right after a four top and that was my only stress of the night. I made $97.00 from 4:00 to 8:30, I thought that was pretty awesome.  Now I’m off to watch this weeks black and white movie which is still up for debate. Thank goodness for the options that Amazon Prime affords us……Zia

I am just a woman finally accepting that I was never meant to be in the box. I don't fit into any stereotypes, please don't try and label me, that doesn't work either. I am embracing my uniqueness in ways that are new and challenging to me, so that I may continue to grow and never stop learning.
View all posts by dragonflyzia →
This entry was posted in life and tagged Amazon Prime, black and white movies, brother, coffee, daughter, friends, gift cards, Hobby Lobby, moon, options, projects, spring flowers, work. Bookmark the permalink.