I can’t believe it’s time to go to bed already….where did the weekend go? I am a little thrown off  because I went into work at 12:15 instead of 3:45 yesterday. I hate when I miss wine taste. It was worth it in the end.  It was a bereavement lunch, that was my first. They were very nice and very generous, it was definitely worth giving up my Saturday.

When I came home I took the kids to a local festival. Basically I paid $6.00 to walk around and feed my kids crap. It was an eclectic mix of people. Mostly I look at peoples skin….that’s my new obsession. When I saw my aunt the other day I noticed how wrinkled her check was….we share the same genes. I was internally freaking out and have been extra generous with the lotion as of late. The kids varied. There were kids with no makeup and kids with too much makeup. There were even teenagers who looked airbrushed. There was one girl who was very tiny and could have been anywhere from 12-15 years old with a tight little shirt on her pregnant little belly. The girl was mortified and I’m glad. 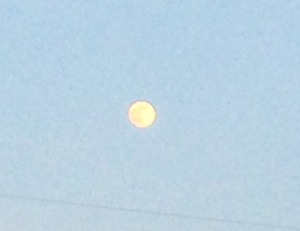 I also had my first funnel cake. I know…crazy, right? I guess I have always been more of a fried dough kind of girl. We split it between the three of us later that night. 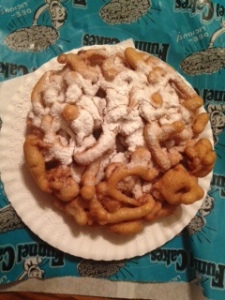 Today I had my dad and his wife over for lunch. I did dread it, but it wasn’t that bad. It’s over thank goodness. Then the girl and I ran to the store because I needed a few things before I started  canning. On our way home I was distracted by wings. I don’t text and drive but I will take my eyes off the road for wings. Once I got a little closer I could see it was an eagle, and was soaring pretty low. It took everything I had to not stop my car in the middle of the road to take a picture. Eagles are still pretty rare around here but they are starting to come back. An eagle is a widely recognized symbol of freedom. In the book Animal Speak it means Illumination of spirit, healing, and creation.

When I was driving I was thinking about the Reiki class and how in July there are group events that include practicing. I was also thinking how crazy I must sound and that is without putting everything I experienced into words. It gives me chills to know what I was thinking when I saw the eagle after reading what it means as a totem in Animal Speak. I’m headed in the right direction, I just need to keep moving forward.

It was a troublesome day in the kitchen. First the skin off of the peaches did not want to come off. I managed with a knife, the wasteful way, it just took forever. The peach vanilla butter is yummy as always. The cherries on the other hand….

It took me forever to clean up the cherry juice from pitting them. The glaze didn’t seem to thicken as much as I am used to but I had to many hours into this. I will check one tomorrow. Cherry pie filling could easily become cherry glaze if necessary. Sadly I still have cherries left over. I am going to have to search for something to do with them.

The girl gave me grief over pitting her half of the cherries so I guilted her into making dinner. I never realized that guilted isn’t a word….oh well today it is.   I told her to Pinterest some pork chop recipes and have at it. She did and she did a nice job. She did make them one at a time and she will need to work on that or continuously feed someone cold food.

That was my eventful weekend. I am up way past my bedtime and need to hit the hay. I just heard that the Cavs won. Do you think Cleveland will still be there in the morning? …..Zia

I am just a woman finally accepting that I was never meant to be in the box. I don't fit into any stereotypes, please don't try and label me, that doesn't work either. I am embracing my uniqueness in ways that are new and challenging to me, so that I may continue to grow and never stop learning.
View all posts by dragonflyzia →
This entry was posted in life and tagged canning, Cavs, Cleveland, daughter, eagle, full moon, funnel cake, Reiki, work. Bookmark the permalink.

2 Responses to Way Too Fast Weekend