I finally found what I was looking for in a coffee table. It’s a little tall and needs to be painted black but it will do just fine. I have been going to the Restore regularly since March looking for a coffee table. Today I went in looking for shutters and found a coffee table.  There’s a piece missing out of the inlay and originally I thought wood glue would do the trick. Now I am thinking that once I paint it black it won’t be that noticeable. It’s temporary just like everything else. The big bonus is that it only cost $6.00, it was some kind of half price day today.

Work was brief…..I was by myself on the floor from 4-5:30, which worked in my favor considering I only had 1 table after 5:30.  There was another rainbow while I was at work….I’m such a bad influence, I had all of the kids outside looking at it. I saw my red dragonfly again today…..twice. I am not saying that it means anything, just that I am noticing it.  I was home by 7:30 and that left plenty of time to clean up and take the girl to Barnes and Noble for the Harry Potter party.

We are such dorks and had the best time. The scavenger hunt was probably my favorite. 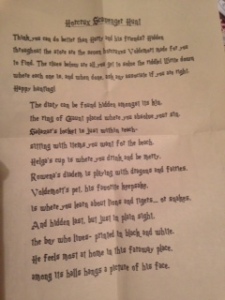 The sorting hat put the girl in Ravenclaw and me in Hufflepuff.

We didn’t pre order the book so we went home around 10:30 or so. They had a pretty good turn out. We aren’t used to sharing the store with that many people at one time. There were some pretty young kids there as well. I gave one girl who was around seven or so a big hint to one of the places on the scavenger hunt and she went crazy…..like I just gave her the key to the candy store. She was adorable. Anything that makes kids excited about reading makes my heart warm and fuzzy. There are certain times in my life that I know I couldn’t have survived without books giving me a place to escape to for a little while.

Once again it’s after midnight and I’m still up….it’s a good thing that I have a light list tomorrow…….Zia

I am just a woman finally accepting that I was never meant to be in the box. I don't fit into any stereotypes, please don't try and label me, that doesn't work either. I am embracing my uniqueness in ways that are new and challenging to me, so that I may continue to grow and never stop learning.
View all posts by dragonflyzia →
This entry was posted in life and tagged Barnes and Noble, books, coffee table, daughter, harry potter, reading, scavenger hunt, sorting hat, work. Bookmark the permalink.