Posted on August 8, 2016 by dragonflyzia 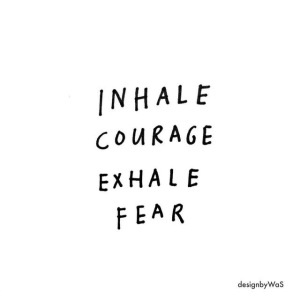 I debated all day about this. Should I? Shouldn’t I? What’s the worst that can happen? You could tell me I suck and while you’re entitled to your opinion that would be harsh and well….still wouldn’t stop me from writing.

I was very excited yesterday when two of my characters started talking to me. I was surprised that it was Grace and Goat. Goat was supposed to be a mention here and there other than his introduction. Grace is all professional and business suit like, I didn’t expect her and Goat….okay I didn’t quite get that far, but I didn’t see that coming. This is the first time Grace meets Goat. This scene is far from over, I have no descriptions of the scenery, no character descriptions (except for brief Goat on stage). The book itself isn’t described very well and I can go on and on with all of the things that are wrong with this, but it’s a start. I am terrified to post this but you know what….life is short?  I want to write….I never said i was good at it. Here goes nothing….

Charlie went into the realm early this morning and worked all day like a mad woman so she could get out of there early. It all worked out perfectly in her head but sometimes life is unpredictable. The chef went on a tiny tangent and threatened to quit for the third time this week. She wasn’t quite sure if he was serious or not but she guessed there was some truth to his threat. He was an odd little man, with faded strawberry blonde hair that was very thin and braided in a skinny rat tail that rested halfway down his back. Mostly he wore his bandana and belted out eighties tunes all day. He was good at his job until he had to deal with any form of stupidity or stress. Those were the things that sent him over the edge and gave him lobster face, his skin is so white that when he turns red, he turns very red. Charlie managed to put out the Danny drama in the midst of her own chaos.

Charlie was tickled when she finished prepping for the big Konus show early and was just getting ready to leave when Grace walked in the door. “Hey you, I was hoping you would be here.” “I was just actually heading out, what’s up ?”Charlie inquired. “I found you something wicked cool today and I was hoping we could have dinner and a drink while we looked at it.” Charlie grinned at her dear friend “ooh presents, I’m excited! The Realm probably isn’t the best place to do this tonight. Konus is playing and they should be here soon to set up. It’s about to get loud in here.”“Crap” Grace said “I didn’t know there was a band” she was cut off mid sentence.“Hello Charlie my love, I was hoping to see you tonight.” “Hello Bragen, you’re here early tonight.” “Don’t call me that “ he said with a pout. My name is Goat, and besides you haven’t been here the last few times we’ve played.” “Goat?” Grace asked. He smiled a perfect smile at her and said yes, Greatest-of-all-time…..Goat.” Charlie looked away before he could turn and see her massive eye roll in his direction.”Charlie is my unwilling muse so I came in early to get my fix before the show.” “Well it’s your lucky night, Charlie said with a smirk “ I might even stay for a whole song. Come on Grace, let’s grab a table.”

There you have it….one part of a tiny scene that isn’t finished yet. I have to write a line or two of a song lyric before I can move forward.  I didn’t plan on those two getting together but it’s happening.  We had a patient today with the name Staughton, how many people have you met with that name? That became a purse note when I decided that the new British bartender would have the same name only he will be called Otter. Staught….ought….Otter. That was my thought process.  My office manager helped with the antique stores name. She gave me Baubles, I added Tarnished. It’s been a productive couple of days.

Today I finished up the driftwood tree, or maybe I should rename it the starfish tree. I don’t totally love it. I tried to pull off the white ribbon and it was pulling the driftwood off so I am stuck with that. I wish I would have added the tiny starfish to the ribbon alone instead of sporadically placing them. If SB doesn’t like it she can always put it on her porch during hurricane season. 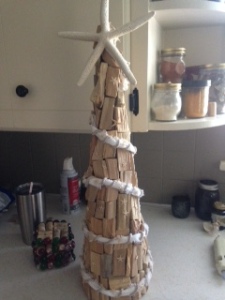 I manged to get one set of coasters out of all of those experiments. I know who is getting this as a present…. 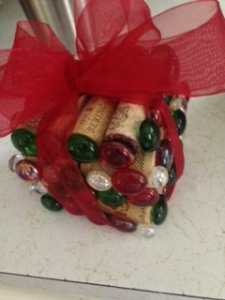 I wouldn’t recommend this project to anyone. PT and I decided on our project for this Christmas, this will require an x-acto knife. My DNA will be all over this project…..

I opted for these Steampunk octipi as embellishments for my limoncello. My first thought was they are manly since they are presents for the boys. My second thought was this could represent one of the seven fishes since our Christmas Eve doesn’t consist of any. I am not complaining….I don’t eat any seafood. Plus, maybe they will take away from my creased labels, I was very disappointed with that. 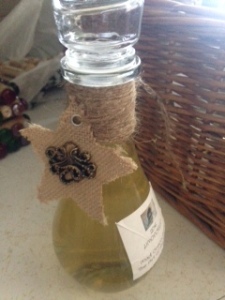 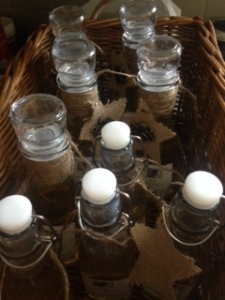 I feel a little more accomplished today. Last night I was like a mad woman running around trying to find the original death certificate of my mom. I was where I thought it was but it wasn’t in plain sight. It was tucked into other paperwork. I need to take that to the title company this week. I have way too much crap in my fire proof lock box. Once this is all settled with the house I am only keeping original documents for their genealogical value. The rest is getting shredded.

That was my night last night, I missed Frontrange Radio and there was no Game of Thrones. It was just me in a panicked chicken with my head cut off mode…….Zia

I am just a woman finally accepting that I was never meant to be in the box. I don't fit into any stereotypes, please don't try and label me, that doesn't work either. I am embracing my uniqueness in ways that are new and challenging to me, so that I may continue to grow and never stop learning.
View all posts by dragonflyzia →
This entry was posted in life and tagged characters, Christmas, courage, diy, fear, legal documents, mom, novel, writing. Bookmark the permalink.