Posted on September 27, 2016 by dragonflyzia

I have no idea what I am preparing for but that’s what it feels like to me. Part of it is preparing for the craft shows for sure, but it feels like more. I spent last night organizing the basement. I am now to the point where I need to organize my supplies for my Mad Concoctions on the side by the Harry Potter closet and I need to clean off my craft table by the dryer. Since apparently I hoard craft supplies…I need to start integrating one box from the garage into the organized supply in the basement a day….starting tomorrow.

I didn’t get a lot done today, just the basic maintaining since the girl needed to use a gift card from Barnes and Noble on a book that was released today. It’s the newest book in the Maze Runner series called The Fever Code. I knew it was coming out late this month so the gift card made it part of her birthday present. I was lured in by a British magazine, they really have the best ones. It’s not something I would normally purchase because of the hefty price tag but there was something about this one that I couldn’t walk away from.

We headed over to Ulta next. There is a rice powder that I use on top of my foundation that I have been out of for a while and my concealer is so low that it isn’t concealing a whole lot. I like the NYX concealer and the Palladio oil absorbing rice powder and I needed both. The bonus was some free Urban Decay mascara sample and my $3.50 coupon. I was two cents short of the $15.00…such a scam but the girl wanted a new chapstick so that gave me more than what I needed. I even like this one but it sure is tingly! 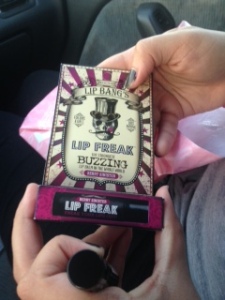 Speaking of the girl……for some reason she wore a Hawaiian shirt to school yesterday. Her hair doesn’t hold a curl just like mine but she can hold the fallen wave all day which is more than mine ever does. That morning I opened the bathroom door right after she released her hair from the braid and it was super curly..the ringlet kind….add in the shirt and the glasses and I said “whoa! What is happening….why are you dressed like Weird Al?” Mom…it’s just a shirt.” I am telling you that it was like Weird Al was in my hallway. This photo is in the car on the way to school after most of the curl fell out….you can still see the shirt.

I have had a few weird dreams the last few nights. Do you remember the dream that I had where I was walking around a town that I didn’t recognize in the waking world but knew in the dreaming world? The one where I saw the Cockroach in a blue pick up and I was trying to hide?  It was the same town, only I was driving to the university. I kept thinking that it was crazy that I was taking the classes before I had officially signed up for them with financial aid, etc. This must be because of the girl and the applications that she is filling out. It was weird though.

I had another dream where I was sitting with a bunch of crafty women, none of which I recognized, talking about the upcoming craft shows. All I remember is that I need to get on it…..with the soap making and to focus on my Chakra blend bath salts because anyone can make bath salts. I woke up and requested a bunch of Chakra related books from the library so I can figure out how to do this.  Sometimes a dream is something I ate, or something I watched and sometimes it’s my subconscious or something else talking to me. The trick is, knowing the difference and I am always guessing. In the end…what do I really know? Not a whole lot…..Zia

I am just a woman finally accepting that I was never meant to be in the box. I don't fit into any stereotypes, please don't try and label me, that doesn't work either. I am embracing my uniqueness in ways that are new and challenging to me, so that I may continue to grow and never stop learning.
View all posts by dragonflyzia →
This entry was posted in life and tagged Barnes and Noble, british, chakra, daughter, dreaming, Kindred Spirit magazine, organizing, Ulta, Weird Al. Bookmark the permalink.