RD and I took a historic tour today through one of our towns oldest cemeteries. I could spend hours here looking at all of the details and maybe one on one it wouldn’t feel so intrusive. There were a lot of people trampling over graves today. There wasn’t any way around it if we were going to get the facts. There were two teenage boys that I thought needed a good slap and I don’t usually have the urge to slap someone’s child. They were disrespectful and it bothered me.

Some of the monuments were created with mad skills….this one was one of my favorite. There is no nameplate but I am sure it was a man of the sea. 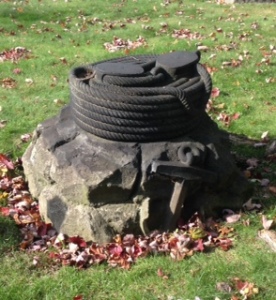 Today was the first day that I could smell Fall in the air. Normally at this time of year in Ohio we are past our peak foliage but we haven’t peaked yet this year.

I pointed out to RD a headstone that said Mary wife of Henry next to a stone that just said Henry. That didn’t seem  fair so when RD found this one I had to snap a picture.

I think it’s safe to say that she wore the pants in that family. It made me smile. Then there was this one…. 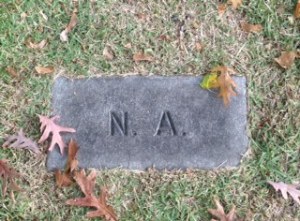 I’m sure it’s someones initials and doesn’t mean “not available” but that’s what came to mind. Then there was the guy who looked a little like Santa that photo bombed my picture. He seemed like an interesting character and I talked to him until he started on the “Jesus” topic. I am sure that some tv psychic isn’t Jesus reincarnated. No theological debate for me….

Then there was the part of the cemetery that held the indigent people. Mixed in that lot is the unmarked grave of a hanged man. I thought she said that he was the only person to suffer capital punishment in our area, sadly it was a botched one. If there was a part of this cemetery that housed the “unfinished business” sector, I would guess this was it. 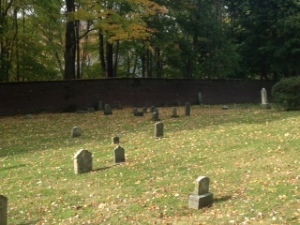 They were the ones closest to that wall and we didn’t walk over that way. The rest of these pictures I found interesting and I wished we could have stayed longer but my waitress job keeps me on a short Saturday leash. 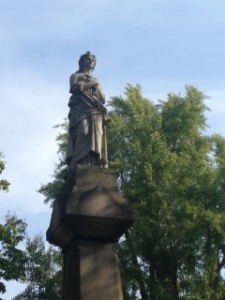 It was very interesting and all of the pictures came out normal….no foreign entities. It was in the daytime as well. I was surprised at how “hilly” the hallowed ground was and let’s just say that I am going to need a lot of work before I can attempt that 5K in December.

Last night the girl and I went to my brothers for my step mom’s (for lack of a better word) birthday. I dreaded it all day but it ended up being okay. I never dreaded going to my brother’s house but now that my dad is home….he is always there.  Now I have to always have “game face” on. I don’t like the rift it is putting between me and my brother.  There are four family members that come first in my life. The boy, the girl, and my two brothers. It bothers me….I used to tell my middle sibling everything, now everything is filtered. Oh well, all families have their problems I guess.

On Thursday for lunch we had Chinese. Our doctor rarely requests a specific lunch so when he does that’s what we have. I thought my fortune was interesting… 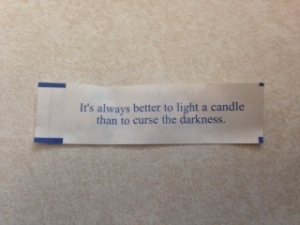 I light lots of candles and now I have a new excuse…..Zia

I am just a woman finally accepting that I was never meant to be in the box. I don't fit into any stereotypes, please don't try and label me, that doesn't work either. I am embracing my uniqueness in ways that are new and challenging to me, so that I may continue to grow and never stop learning.
View all posts by dragonflyzia →
This entry was posted in life and tagged brother, cemetery, family, fortune cookie, friend, graves, history, pictures, tombstone. Bookmark the permalink.