I can’t believe that it’s bedtime already? There are just not enough hours in the day,especially today.  I can’t hit the snooze button too many times tomorrow because it’s Halloween and I will require extra time to be the sparkly witch that I will be.

Today it was all about the girl with a little of my running around mixed in. One of the girl’s from work lost 100 pounds and tomorrow is a Halloween party/ celebration for this girl. It was my idea to have everyone bring their favorite healthy food. It not fair to have a celebration full of food that this girl can’t eat. I am bringing this…..http://www.thegraciouspantry.com/clean-eating-citrus-celery-salad/

We went to a local park this afternoon to have the girl’s senior pictures taken. We didn’t go the big park where I went and where most people go but I think I made the right choice. The kid who took her pictures is a very talented senior who even has a couple of weddings on his resume. I didn’t want him driving all over and this park is on the main strip. When the girl and I walked around and went exploring a rather large red tail flew by us a few times. That’s all it took for me to know that I made the right choice. I messed around a little before the kid got there….

It’s her picture and I let her wear whatever she wanted.  I doubt the holy jeans will even be in the picture. Converse and a Captain America shirt….that’s my kid. I suggested a shot by the old buggy but the picture he took has just the wheel behind her. I liked it a lot, he did a really nice job. I was standing behind them when I took this one so you would know what I was talking about.

Thankfully it stopped raining for a few hours so we could get these taken. I can’t wait to see the pictures.

The girl and I stopped to look at the pumpkins before we headed out of the park and we decided that this one was our favorite. 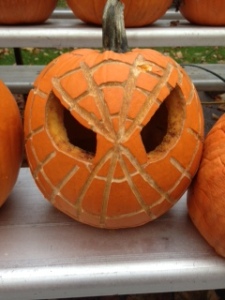 Then we ran to Michael’s because the girl waited until the last minute for her Halloween costume. RD said they had their stuff on clearance so we stopped there. The girl ended up with a witch hat so I guess that’s the popular costume this year. It’s a Walking Dead night so I won’t be with her in the morning when she is getting ready but I’m sure she will be fine. I won’t have to share the bathroom in the morning so that is a bonus for me.

The boy wanted Sriracha chicken for dinner, the girl had to make sugar cookie cutouts for her school party tomorrow and I had to make that celery recipe. I swear it took me an hour to clean up that mess. Tomorrow nights dinner will be something much easier, maybe pizza?  I’ll figure that one out tomorrow….Zia

I am just a woman finally accepting that I was never meant to be in the box. I don't fit into any stereotypes, please don't try and label me, that doesn't work either. I am embracing my uniqueness in ways that are new and challenging to me, so that I may continue to grow and never stop learning.
View all posts by dragonflyzia →
This entry was posted in life and tagged Captain America, daughter, Halloween, healthy recipe, michaels, pumpkin, senior, time, witch. Bookmark the permalink.