It Ain’t a Fit Night Out For Man or Beast

Saturday night after I came home from my waitress job I made the girl and her friend watch The Fateful Glass of Beer. Friday at work during a snow squall a patient walked through the doors and said “it’s not a fit night out for man or beast.” Now I knew I have heard this before….I just couldn’t remember where I had heard it. I googled it and this old movie from 1933 popped up. I have never heard of this movie before and maybe an hour went by before I realized that I knew this because Yukon Cornelius said this line during the blizzard when Rudolph saved the day.  The 1933 movie had a prospector from the Yukon in it and that’s who said the line. I was hoping that maybe there were more references….like a Disney movie but there weren’t. There is a crazy dog sled scene that made the movie memorable. It was only 18 minutes long and a very different movie.

I had some weird random texts from a former employer Friday night. I debated on whether or not to post them but I decided that you needed to see them to get the full effect.  I tried to be careful with my answers because I don’t want to burn this bridge and there is no way in hell I am ever sleeping with it either. 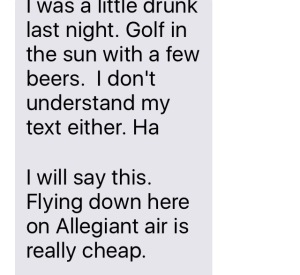 I responded with “great to know blah blah and my new email is this”… How long has it been since I worked there? Like four years? Whatever…he is only interested because I am not. Go throw your money at someone who cares. I just don’t understand why I am the one who gets drunk dialed? Oh and it gets stranger….

There was a psychic fair at my little witch store and I had no interest in going until I saw that the aura/chakra photography lady was there. So I put my big girl panties on and went right at noon. I still had to wait until 12:40…ugh! I happen to run into someone who worked at the old lab and we sat and talked while we were waiting. I didn’t mention anything about the texts but my old boss came up regardless. He is such a tramp, she told me stories I didn’t even know about. I guess money can buy lots of affection…ick. Ickity ick, actually. Then she starts unloading about her problems and thinks it’s bad luck so I suggest she buys some sage and starts smudging. Then she looks at her granddaughter  and says “this little witch knows everything.” Nobody called me that at the lab? Not that I know of anyway. Oh well, her granddaughter bought her some sage and I hope it works for her.  I was there for about a half an hour before my anxiety kicked in. There was so much energy swirling around in that place I could barely breathe. I have never liked crowds and this was different. I don’t know how to explain the difference, it just was just different.

I had my reading and she was really nice and positive talking abut the emerald greens and bright blues around me. Me? I wanted know about the blockages, skip the fluff and show me what I need to work on. Seriously how many years do I have left? The nicely printed out report didn’t include the photo of the blocked chakras but she let me take a picture of her computer. My root, my throat and my third eye have the biggest blockages.

The more I look at it, the more things I see that need work.  Somebody asked me today “why are you focusing on the bad?” It’s not bad, it’s just the parts that need work. I don’t want to live my life with my head in the sand….I am here to learn and grow and this is just giving me some pointers on where to get busy…..Zia

I am just a woman finally accepting that I was never meant to be in the box. I don't fit into any stereotypes, please don't try and label me, that doesn't work either. I am embracing my uniqueness in ways that are new and challenging to me, so that I may continue to grow and never stop learning.
View all posts by dragonflyzia →
This entry was posted in life and tagged aura photography, chakras, daughter, friends, psychic fair, smudging, The fateful Glass of Beer, witch, work. Bookmark the permalink.