I sure as heck didn’t see my day ending like this….

I can’t do it anymore. They say that getting older and quitting smoking are both good for you….how come no one told self esteem that? I have never had a positive body image even when I was a size four, I still had flaws and they felt magnified. This is out of control, seriously folks….I’m disgusted with myself.

The girl wanted pizza and she has been asking for a certain kind, I think it tastes horrible but she likes it so I bought it. While we were waiting I thought we could walk down to Chico’s and check out the clearance section. I tried on a black shirt and a black tank top and it was awful. They have weird sizing there but I like the quality of the clothes. The 2 in the tank top was too big under the arms and anything smaller would have been too clingy. I think it may have been the same with the black shirt since there were these weird flaps. The point is….I can’t even go into a fancy store, where I can barely afford the items on clearance and find something that fits. Nothing fits me right. I wasn’t going to cry damn it!

Okay, removed the contacts (I really like my new trial of Biofinity Energy’s, my eyes are less tired),put on my glasses and grabbed a glass of wine. I hate it when I cry and trust me….I’m an ugly crier.

Here’s the thing…most days I’m lucky because I wear scrubs to work and don’t change if I have running around to do afterwards. I really only have to struggle once a month for book club or the rare occurrence when I actually go somewhere. I am meeting a friend at one of the newer local wineries this week. My bed will have almost every piece of clothing strewed upon it before I say “this is as good as it gets” and will spend the rest of the night self conscious. It’s almost better to stay home than to struggle with what to wear.

The girl asked for new underwear and she isn’t usually a name brand person except in this situation. So off to the mall we went. Victoria’s Secret had their panties on sale 5 for $28.00, I had a coupon and that made it 6 pair. The girl picked out her five from the PINK table and I picked out one that didn’t have watermelons on it for the free pair.  I really don’t like going to the mall and since we were there I stopped at few stores that weren’t on the list.

My cousin and his wife are having twins and the shower is in a few weeks. I stopped into Gymboree to check out their sales. 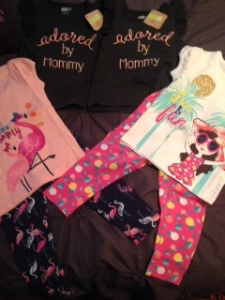 The shower invitation asked for books in lieu of cards with a note written inside. I thought that was a sweet touch and found this book very fitting coming from me.  I was happy with my deals from Gymboree and if the clothes are made the same as they were when my kids were little…they will last through more than one kid.

Someone had suggested that I try Rue 21 for reasonably priced clothing with a Boho flair. They had some super cute things on the plus side….I may be tipping the boat but I am still on the regular side. I was disappointed in the selection and never tried anything on.

More than once when we were walking around the mall I passed someone who made me cringe internally. I stress so much about what I put on my body and these other people either don’t have mirrors or do not care. The manufacturers who make the clothes need to lay off of the clingy fabric. If I can count your rolls from fifty feet….you probably shouldn’t be wearing that. Then there was the woman who was wearing a sweater and jeans that were two sizes too big and ugg boots…..it was 70 degrees today.

I don’t have the time or money or skill to make my own clothes…..so I will probably bore you with random fits like this from time to time, until I figure out how to drop twenty five pounds.

If this isn’t enough….I haven’t a clue what I am supposed to put on my feet this summer. The Plantar fasciitis is changing things up. I haven’t investigated yet so I am going to hold off on the woe is me…now I will have to wear old lady shoes, until I know that for sure. I really hope I am wrong on that one…..Zia

I am just a woman finally accepting that I was never meant to be in the box. I don't fit into any stereotypes, please don't try and label me, that doesn't work either. I am embracing my uniqueness in ways that are new and challenging to me, so that I may continue to grow and never stop learning.
View all posts by dragonflyzia →
This entry was posted in life and tagged baby shower, body image, clothing, getting older, metabolism change, plantar fasciitis, quitting smoking, self esteem, weight gain. Bookmark the permalink.