The girl and I stopped at a local library today. I don’t frequent this branch very often. They tore down the old library and built a new fancy one in it’s place. All building and no books…They do have one nice feature, a used book store in the basement. The girl will be with her dad next weekend so she won’t be with me when they have their 50% off sale. She will miss all of the local authors as well. I always go so I took her today so we can scout out the books. Hopefully the few she pointed out will still be there next weekend. I parked by the creek in hopes that I might spot a dragonfly or two. I did spot a dragonfly but it was closer to the building.

I sent a photo to Walgreen’s of the girl in her cap and gown with a cute thank you quote from Pinterest attached. I told her “Now I have helped you get out of writing most of the thank you cards but some people will still require the hand written note. That included the chef from my waitress job. This is what the girl wrote….

It made him bust out laughing. I know he doesn’t always feel appreciated so I made sure the girl thanked him. I always say “don’t die and don’t kill anyone” every Saturday night before I leave. Today he said to me after I spoke the words “you didn’t say that to me last week?” crap…he noticed. “You were worried you would jinx me and I would be dead and couldn’t heat up your food for you?” He thought that was funny too. He laughed and laughed…honestly I didn’t think he would notice.

My party at work tonight was a small wedding reception. The paid for 42 but I would say only 34 showed up. I loved the “Zen” feel of the centerpieces.

The bride told me that they found all of these rocks together at one of Ohio’s biggest lakes.  They had lots of nice touches like this. 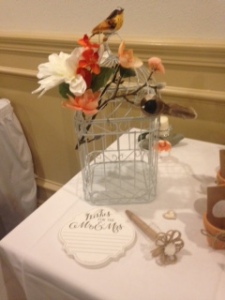 It turns out the groom is the brother of my friend little K. She was there with her husband and son. I don’t know if you remember me talking about her….she was the one who adopted a baby at almost 50. He is four now…where does the time go. As parties go…they were fairly easy. I go there at three and left at nine and that’s not so bad.

Here’s the thing….I have a boatload of cookies leftover from the girls graduation party and little K insisted I take some cookies home. Now our cookies have cookies! I think I might freeze some, that way I can save the best for when a craving strikes. I have a lot of cookies, did I mention that?

It’s been a rough week over here and this girl is tired. I am looking forward to tomorrow where I plan on doing as little as possible……Zia

I am just a woman finally accepting that I was never meant to be in the box. I don't fit into any stereotypes, please don't try and label me, that doesn't work either. I am embracing my uniqueness in ways that are new and challenging to me, so that I may continue to grow and never stop learning.
View all posts by dragonflyzia →
This entry was posted in life and tagged books, cookies, daughter, friends, graduation party, library, thank you, wedding reception, zen. Bookmark the permalink.