The psychic fair was yesterday and I went with KB and her mom and RD. I chose to have a fairy reading which is different than an actual psychic reading. I’m not gonna lie….there was a part of me that was jealous when I was hearing the feedback. One day later and I am happy with my choice, but I doubted myself for a while there yesterday.

RD being the skeptic went both days and saw different people each day and both of her readings were almost word for word. She believes now. KB had a wonderful reading. I think she found some peace after hearing the words her husband was relaying. If you remember from earlier this year, KB’s husband died unexpectedly in his early forties.  KB said she never said a word, the woman just kept turning cards and speaking the truth until her husband came through . She was crying and then I was crying with her, but like I said this was a good thing.

My reading was on fairy energy and she used fairy cards. One of the cards that stuck out to me was the family harmony card. The way it fell in the spread caused her to ask “is there anyone who would make fun or ridicule you for this upcoming fairy project?” She was referring to my family and friends and I said “yeah, all of them.” Most of them anyway. I still don’t know it this project is new or has to do with my Charlie story? I’m used to being teased about the fairies, Cockroach was the worst. One of the tattoos he got after I had him removed was of fairies being stabbed. Real mature….

The lady that did my reading is the one who is hosting the fairy workshop next weekend in the park. I have been signed up for a while and I hope the weather stays nice because I am looking forward to it.

I know you guys think I’m a little crazy or quirky but I am who I am. Every time I try and tone it down a little so everyone else is comfortable then I am the one who loses. This little scene in Ally McBeal describes it perfectly and gets me teary eyed every single time. It was I saw a unicorn part ll Ally McBeal on Youtube and it’s been taken down …..figures. It’s a seen where she tells Billy all of the things that she has been telling herself because society says it’s so and then she remembers.  I am very disappointed that it was taken down.

The place where the psychic fair was yesterday added a little fairy space that is simply adorable and someday I am going to copy some of it. Next house…. 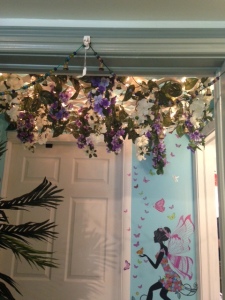 I finally moved the girls desk into the walk through room with mine. She doesn’t want me to paint it but she doesn’t like how the inlays look or how the desk isn’t smooth. My plan is to decoupage a sepia toned map to the inlays and reseal the top. Any thoughts on that? 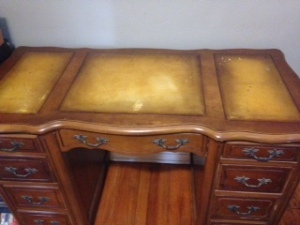 Speaking of redoing things, here is KB’s new bedroom. It needs art but other than that it came out really cute.

That’s it for me. Once again I am up well past my bedtime…..Zia

I am just a woman finally accepting that I was never meant to be in the box. I don't fit into any stereotypes, please don't try and label me, that doesn't work either. I am embracing my uniqueness in ways that are new and challenging to me, so that I may continue to grow and never stop learning.
View all posts by dragonflyzia →
This entry was posted in life and tagged ally mcbeal, cockroach, fairies, friends, new bedroom, psychic fair, psychic reading, unicorn, upcycle desk. Bookmark the permalink.