With a Little Help From My Friends…..

There is no way I could have made this move without my friends! It was a lot to ask especially with the 94 degree temperature outside. They still showed up and kicked ass, despite the heat. JD came multiple days as well as my office manager and new landlord. I could not have done it without them. The boy had two friends show up and they kicked more ass….only because they were younger and boys, I did this to my toe before 9am…

It was too hot to even notice. There was a lot of simultaneous purging happening throughout the move. Some of it I didn’t even have a say in. I should be more mad than I am ‘but’ I have been working on the downsizing for a while and I did need help. The way I look at it….if I found it in the trash and I wanted it… than I was meant to keep it. The girl is freaking out because we can’t find her box of nail polish…..I guess there are worse things to replace….. The purge needed to happen…it just did.

Lot’s of unexpected things ended up at the curb which was some kind of beacon for pickers….they trashed my trashed. I finally got through to the garbage company and scheduled a pick up for Thursday. My new landlord drove by and said it was all gone? I had text the old landlord when I had a date for removal? He must have paid someone and he never responded. I knew I was never going to get my deposit back anyway. I still cleaned ….and the kitchen was cleaner than when I moved it….just saying. If he was a nicer person I would suggest that he not rent to men or people with dogs…the ghosty goo in the basement isn’t a fan of either.

The new house feels good and there is no sign of any ghosty goos. Although…..the other day when the girl and I were on the back porch the dog was dancing around the back of the garage like she was happy to see someone. I thought it was odd and made the girl watch too, she agreed it was weird. Today when one of the landlords was over he pointed out these…..behind the garage….my mouth is still hanging open…

SB came over today to help with placement, I saved about 80% of the art for her to place. Some of it is out of my comfort zone with the arranging but I trust her. I will take pictures soon, I promise. The bathroom is 99.9% done….I need one storage piece. The kitchen is 99.9% done…I need one more container for herbs. The living room is 99.9% done…I am waiting on the custom painted end table. My bedroom is 99.9% done…I have to organize my paperwork, and I need a meditation poof…I have room now. The basement is 50% done….once I finish the living space in order, this is where I need to spend my time. I know there is more to purge and I will do that as I organize it.

I was organizing the linen closet and had some supervision…. 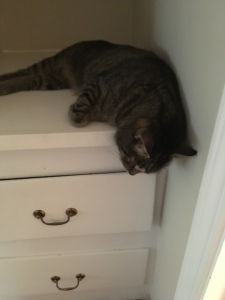 Until I bored him…. 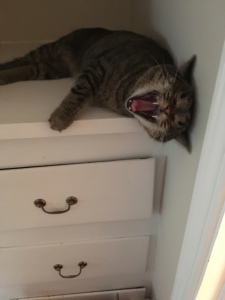 The girl and I sat outside one night and I snapped this picture from the back porch….

I have been pretty out of it this week. Working Monday was pretty hard, I was still really dehydrated…physically…and out of it. When Wednesday rolled around I woke up feeling really good and yet I still did this…..

I guess I wasn’t all the way better yet. Thankfully it wasn’t turned on…. Last night I crashed on the living room floor…it’s been a rough week. It has been worth every struggle and bead of sweat in the end. I promise there will be pictures to follow….I just wanted to touch base and let you know that all is good….Zia

I am just a woman finally accepting that I was never meant to be in the box. I don't fit into any stereotypes, please don't try and label me, that doesn't work either. I am embracing my uniqueness in ways that are new and challenging to me, so that I may continue to grow and never stop learning.
View all posts by dragonflyzia →
This entry was posted in life and tagged broken toe, cat, downsizing, friends, ghost, moving, organizing, purging, sunset. Bookmark the permalink.

2 Responses to With a Little Help From My Friends…..