Posted on September 20, 2018 by dragonflyzia

Today was my first night of Italian classes! It was fun and overwhelming all at the same time. This teacher is all for class participation. I told the girl how everybody had their turn saying my name is…. and then again I am from and I live…in Italian. He also teaches Italian at the same university that the girl attends. I was telling her about the class participation and she said “no way, I’d drop that class!” I was uncomfortable at first but I got over it.  This class goes every Thursday from now until December 20th, except for Thanksgiving…we have that day off. I was surprised at the number of people who were there….between 25 and 30. I thought that was a lot. I hope I retain most of what I learn.

We also had a potluck at work today and I was lucky enough to have BV share her garden fresh peppers with me….

I made stuffed peppers a few weeks ago when Force of Nature Girl begged me to make stuffed pepper soup. This time I used the ground beef that was on sale at my little Italian grocery store where I buy my produce. There is a distinct difference in the taste. Nobody else seemed to notice thank goodness but I did. We don’t eat a lot of meat in this house but when we do it’s better quality than what is mixed in these peppers. Cooking for the masses is different than cooking for three….

In other exciting news this week…the Faerie Magazine Outlander issue came out! There is a tutorial in it that screams “droughtlander” party. A little arts and crafts plus an episode or two, equals a great day!

It will be sometime in October…we haven’t picked a date yet. In looking at the calendar I happened to notice that there is a full moon on Halloween. The last time I remember a full moon on Halloween it was in 2001, it was also a blue moon…I left my ex husband the next day and my mom died three days later. That was a huge period of change for me….

We are still experiencing spider-geddon over here. Tonight when I got home from class there was one hanging out by the door frame and as soon as I opened the door he fell through the door frame and onto the floor. I stomped on him after screaming and doing a little dance. This is so crazy! The girl tossed the body out on the porch and said “this serves as warning to the rest of you!” It was a lot of drama… Yesterday the girl saw a big one on the metal threshold,  when I opened the door a smaller one zoomed by and jumped down into the vent….like he knew where he was going. I sprayed peppermint oil on the other one and it scurried away.

This guy was outside tonight….he is so big that you can see the flash in one of his eyes.

This was the size of the one in the basement that we lost it over! I haven’t seen a spider down there since I made a wide path of diatomaceous earth around a raised section of the basement floor. I didn’t want to put it outside but it looks like I might have to? I will do it Saturday once Friday night’s rain dries up. I have never lived anywhere where the spiders sit at the door waiting for it to be opened so the can come in. I did not send that invitation!

Why can’t they all be as cute as Walter and Jesse? Walter has been hanging out by the kitchen sink for about a week. Jesse showed up this morning. It’s fruit fly season so they can hang out as long as they want. 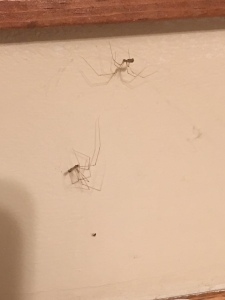 The girl named them after I said they were not to be killed. Walter is on the top and Jesse is on the bottom and they are welcome here.

I found this article after my Sunday morning nightmare and some things made sense. https://willowsoul.com/blogs/numbers/3-reasons-why-you-are-seeing-666-the-meaning-of-666  I have been trying harder to pay attention to my thought patterns this week and correct them when necessary. Just like me….it’s a work in progress…..Zia

I am just a woman finally accepting that I was never meant to be in the box. I don't fit into any stereotypes, please don't try and label me, that doesn't work either. I am embracing my uniqueness in ways that are new and challenging to me, so that I may continue to grow and never stop learning.
View all posts by dragonflyzia →
This entry was posted in life and tagged daughter, faerie magazine, friends, full moon, Italian class, nightmare, Outlander, party, spider. Bookmark the permalink.

"It is no bad thing to celebrate a simple life." -Tolkien