I Guess It Was a Good Thing

I begrudgingly agreed to get a colonoscopy and I told no family members other than my kids. My brothers and father are the biggest nags about it and I will tell them after I get my results. Today the doctor removed one polyp, he said it was a decent size but didn’t look cancerous and he will send it to the lab to be sure. That’s a pretty big assumption? Don’t get me wrong I will do a little dance if he is correct but if he’s wrong? Let’s just hope he is right.

I went in this morning and I wasn’t starving or dying for a cup of coffee. Yesterday was harder in that respect.I am not sure why? When I started the GAPS diet I basically did a liquid diet for a few days so I know I can do it. I guess I didn’t want to do it yesterday. The Optician told me I would have to get naked, thankfully she was wrong. I got to keep my bra, shirt, and socks on the whole time. I was a little concerned when the nurse put on the heart monitor and the oxygen…what the heck? When she started to give me the anesthesia I looked at the liquid in the shot thingy and first said “I know I don’t need all of that, followed by ugh! What is that taste?” That taste didn’t leave my mouth until after 4pm and she probably gave it to me around 9:30 am.

The next thing I know I opened my eyes and looked at a wall while passing some gas. The gas part is slightly better tonight…just slightly. I never felt a thing during the actual procedure and actually accomplished a lot today. After dinner my stomach was very loud during the digestion process. I tried another recipe from that cookbook I got from the library “Against All Grain” Even the Boy liked it …hashtag miracle.

This recipe goes in the keeper file…it was so good. I also finished up one of the bird food recipe projects. It is taking forever to render the lard and hopefully I will get the other one done before bed. Like I said…I got a lot done today….yesterday was the hard day.

It’s true what they say…the day before is hell. I don’t know if I can do that again in three years?  I couldn’t use Gatorade because of the sugar and besides it’s gross just like Kool Aid…yuck. So they prescribed me a powder that I could mix with water.

I wimped out and in 16 of the 64ounces I made some herbal tea with peppermint, lavender, chamomile, and marigold. There were other things in it but my goal was to make it easier to drink. It didn’t hit me until my second trip to the bathroom that it was supposed to be clear. Lucky for me it didn’t matter…slight yellow was okay. I started drinking this concoction around 6pm, it should have only taken me two hours or so…it took me more like three. It was awful.

Luckily I get HBO through my Amazon Prime which gives me the option of pausing the show. Also lucky for me…last night’s battle was giving the Girl anxiety.  She even asked me once “are you sure you don’t have to poop? I need a break, this is intense!” It was a very dark episode last night and I mean literally. When I showed the Girl the photo I picked for this post she was worried it might be a spoiler? It can’t be a spoiler if you can’t see it. The beginning was the worst and I didn’t love Ghost being on the front line but all in all it was an excellent episode.

Thankfully they did right by Lyanna Mormont…such a little bad ass and the queen of badasses Arya…kicked some major ass last night.  Did I mention it was an excellent episode? Spoiler photo ahead if you can see in the dark….

One of the few things I accomplished on Sunday was organizing my beads. All of my beads are now in this contraption…

I purged this much…. 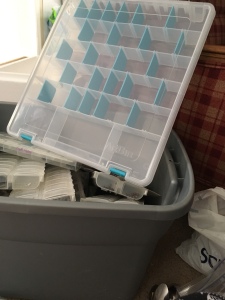 I wish I knew someone that would benefit from the ArtBin organizer, it’s like new. I don’t so now it’s in my trunk for a donation with other craft supplies I collected today. My craft supplies haven’t been this organized in years, hopefully it will make it easier to create when the mood strikes. I’m just happy that nothing is on the floor and all is swept and looks clean.

Somebody posted this on Instagram and it made me said “yes, this!”

Powerful was the word that came to my mind….Zia

I am just a woman finally accepting that I was never meant to be in the box. I don't fit into any stereotypes, please don't try and label me, that doesn't work either. I am embracing my uniqueness in ways that are new and challenging to me, so that I may continue to grow and never stop learning.
View all posts by dragonflyzia →
This entry was posted in life and tagged Amazon Prime, colonoscopy, daughter, game of thrones, jewelry making, organizing, purging, son, star. Bookmark the permalink.