What a whirlwind of a weekend! I had commitments everyday…book club on Friday night, SB’s daughter had a graduation party on Saturday, and today I volunteered with my favorite literary non profit. It’s been a hot weekend but at least today we were able to hang out in the pool next door.

Book club was small, SB didn’t come because she was still doing prep for the party on Saturday and JD was sick. That left three of us…four if you count the Girl but let’s be real…she was only there for the food. I think I need to find us more members.

I woke up early Saturday because I had some things I “had” to do and I had a time limit. I was bringing my dress form to the graduation party and I had to get there a little early. I needed to weed the front bushes, it was starting to look bad. So that’s what I did first. I brushed my hair and teeth, threw on some old clothes and headed outside. I wasn’t too concerned with not having any make up on because I was down in the dirt and who was going to see me anyway? I was about halfway done when the neighbor across the street decided to walk over and introduce himself…of course he did. He seems like a nice guy, his wife was dog sitting so I didn’t meet her yet. The whole time we were talking the no makeup thing was in the back of my head…I was so embarrassed.

I got all of my running around done and had just enough time to freshen up and grab the Girl before we headed to the party. This is why SB needed my dress form.

It was a beautiful pavilion and there was a nice cross breeze so it was mostly comfortable.

SB hired a local ice cream truck for the party. They had ice cream from a local dairy farm where they make their own ice cream. I decided to be brave and give it a try. When I tried a sample of the Girl’s store bought ice cream about a month ago it was gross..too sweet. I picked chocolate because if I was going to risk a reaction, I might as well make it good. I am super excited to say that the flavor was perfect, it was not too sweet AND I did not have a reaction. I wasn’t bloated and there were no bumps on my face. This was a very exciting win for me. Now I just need to contact them and find out where I can buy their ice cream.

We left the party and did a little bit more running around before we headed home. Last night we had a movie night. She made me watch Mary Poppins and I made her watch Coal Miner’s Daughter.

I had to be down at the university by 10am this morning. There was an arts festival and that is where I was volunteering. The three hours went by pretty quick. I was paired up with an adult art student (still younger than me). She seemed nice and we worked well together. The tent next door was ours too. They had a table set up with books written by local authors and there were some poets reading their work.  It was a nice morning.

By the end of my shift at 1pm it was starting to get pretty toasty outside. I brought the Girl with me and she hung out in the air conditioned coffee shop reading a book while I was volunteering. She came to our tent right before I was done. We walked around and looked at all of the other tents that were set up by different organizations and local artisans. We also popped into the universities mineral museum which is the Girl’s area. She knew the person who was manning the information table and I do believe she even received a job offer. (insert happy dance) She needs a job and geology is her field so maybe this one will stick. Fingers crossed. 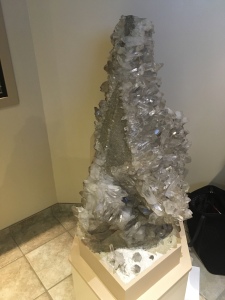 There were a few places I wanted to stop after we were done but after walking around in the heat….I forgot all about them. The Girl and I had a one track mind….pool.  Our neighbor’s have a certain time when they go into the pool and rarely veer from that schedule. We were able to hang out in the pool for about an hour and a half. We could have stayed longer but I still had to food prep for the week and make dinner.

It was a really good weekend but now it’s almost 11:30 and I am up way past my bedtime. It’s time to hit the hay….Zia

I am just a woman finally accepting that I was never meant to be in the box. I don't fit into any stereotypes, please don't try and label me, that doesn't work either. I am embracing my uniqueness in ways that are new and challenging to me, so that I may continue to grow and never stop learning.
View all posts by dragonflyzia →
This entry was posted in life and tagged angel, book club, friends, graduation party, literary group, moon, neighbors, volunteer, writing. Bookmark the permalink.