PT and I left for our road trip on Sunday…so many things happened so I will do my best to start from the beginning.

PT picked me up early Sunday morning around 8am. When we pulled out of my street and she turned left instead of right is when I should have asked which way we were going. My Google maps said that through Pennsylvania was the fastest, so that is the way I thought we would go?  We were already on the Pennsylvania turnpike when PT asked Siri for directions to the Hawthorne Hotel.  I don’t use Siri but I do use Google maps and they don’t work the same so I was confused. So Siri sent us up through Pennsylvania to New York. We went in a complete circle and it set us back almost an hour.

I did say “Hi Amy!” when we passed through Buffalo. Too bad we didn’t have more time or we could have planned a get together. 🙂  Two strange things I noticed in New York…first there are patches and patches of dead trees, it looks so sad…

Secondly…if you stop at a rest stop you have to travel over the highway to get to the bathroom?

Another strange thing…three different times we were driving under blue skies and we were rained on! It was so strange and an unusual way to start a road trip. We followed 90 all the way through New York until it turned into the Massachusetts Pike. That was the worst part of the drive up. We didn’t make it to Salem until almost 8pm.

We checked in and unloaded and then headed down to the dining room in the hotel for dinner.

I didn’t have many choices on the menu so I chose a portabella burger without a bun. I did not ask how the marinade was made which was stupid on my part and I had a very slight swelling around the eyes the next morning. It didn’t last all day and I was the only one who noticed.

I slept fairly well and I was surprise by that, I think it was the pillows. Another guest and I ended up talking about it on an elevator ride on Tuesday. They have the best pillows at the Hawthorne Hotel!  I stopped looking for good pillows years ago because I had lost hope until sleeping on these. The staff at the desk had no idea where they were purchased so I think I will email the manager. Maybe it will help? I want those pillows!

I woke up early on Monday…I know, I know, I like my sleep but this is a once in a lifetime trip so I want to see it all. I ventured out for a bit while PT was still sleeping. My goal was to find a coffee shop. I did not find one my first time out and only because I didn’t want to venture out too far from the hotel. I ended up grabbing a complimentary coffee and tea from the hotel lobby. I can’t speak for the tea but the coffee was pretty good.

We ate breakfast in the hotel dining room. PT had a breakfast of seafood and hollandaise sauce. I had scrambled eggs and bacon…the bacon was super yummy. We finished breakfast and headed out…

Here’s the thing about Salem…most places don’t open until 11am with the exception of a few that open at 10am. We checked out a few places that opened early and then we were drawn in by “Cry Innocent.” This was my second favorite  part of the trip. It was a production that included audience participation. The costumes were great although they looked incredibly hot….or maybe that was because it was a million degrees in Salem this week. 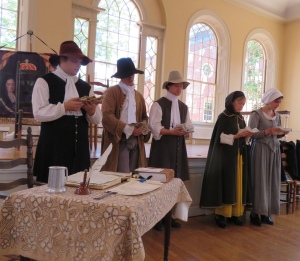 Listening to the historical evidence I could see how the people could be persuaded to believe but I voted against. I highly recommend this production to anyone visiting the area. We also did the movie and tour package. That’s where I found the cemetery and memorial. 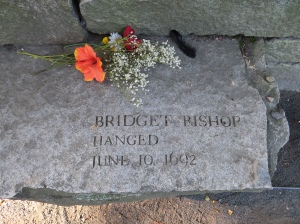 When we left there we headed to The Coven’s Cottage. I love everything about this store and the decorations were to die for which is why they have the no phone policy that they do. PT and I are makers so when we came back to the hotel we wrote down all of the components we could remember and went back on Tuesday to be sure. It was hands down the prettiest shop in all of Salem. 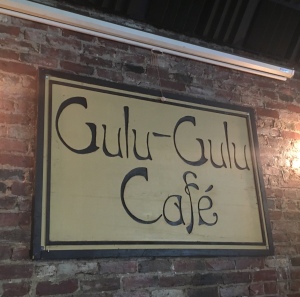 We then headed to Gulu Gulu cafe for lunch. We both had a very yummy cranasauras rex salad which was my favorite meal in Salem. We walked around some more and I found Salem t-shirts for myself, the Boy, and the Girl. Another fun fact about Salem…most things don’t open until 11 and then they close at 5. Those are pretty specific hours and they make sense in the Winter but in the Summer? I don’t get it.

PT was having plantar fasciitis pain so we stayed at the hotel and had a snack at the bar. It was fun..we met some locals. I’m glad we chose to go there.

I woke up early Tuesday morning as well. I knew PT’s foot was bothering her and I didn’t think she wanted to go back to the cemetery so I got up early and headed out on my own. I even ended up walking all the way down to the House of Seven Gables..that was a haul. I passed a lot of people with dogs and with my nose walking up the street on an already hot and humid morning….could tell you where they all did their business. Salem is very dog friendly if you travel with your pet. On this trek out I finally found a coffee shop and bought myself a latte and PT an astrology tea and headed back to the hotel.

Tuesday morning we went to The Ugly Mug Cafe for breakfast. The food was just okay but the service was the best in Salem. PT liked her food and while I liked mine..the bacon didn’t make the cut. If I could have Ugly Mug eggs with Hawthorne House bacon, it would be perfect.

After breakfast we had a few stores on out list…We started with Haus Witch. They had glass spray bottles for cleaning that I was interested in and purchased while there. I also picked up a sage spray that smelled amazing.

Then we went to Jolie Tea Company where I had a chocolate macaroon. The cookie was made from almond flour and I knew I would have a sugar reaction but I had it anyway. The tiny blemish on my chin was well worth the chocolate goodness in the macaroon. I also picked up some great herbal teas to make some iced tea…I need a Summer drink and I think this will do the trick.

We also checked out some of the more touristy things…

My favorite part of the whole trip was making a broom at The Witchery. Gret is a beautiful soul and if I lived closer we would totally be friends.

Making that broom with PT was my favorite part of the trip. We put the brooms straight in the car before we headed to the hotel to change for dinner.

Our reservations were for 6:15 at Fins so PT could get her lobster. We were walking down the side street off of the hotel..Union St when PT fell. It happened in slow motion and I reached out but could not grab her in time. She hit the pavement hard and the first thing I did was reach down and say “PT are you okay?”  My second thought which I am embarrassed to have was “fuck….I’m going to have to drive home.” It was brief..but it was still there. I called 911 and they were super fast in getting there. That walk I took the first morning? That gave me the landmarks I needed to get the ambulance there because I didn’t know the name of the street.

We spent most of the night in the ER. When PT fell she rolled her right wrist and it not only broke in two places…the doctor said one of the bones was grossly displaced. After he failed at manipulating it he tried pulling it with weights. He put her fingers in this rubber contraption and then hung weights from the arm. It helped some but she is going to need surgery. 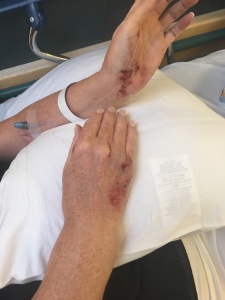 The doctor also mentioned that he usually sees this in October…a lot. Maybe Salem should make a disclaimer about their bumpy, uneven sidewalks….since this isn’t new…

They put her in a splint, called in some pain medicine and sent her on her way. We came back to the hotel where she had a less than satisfactory Caesar’s salad and I had some sweet potato fries which I discovered I can eat. Then we went to bed. I felt so bad….how awful.

I woke up around 3:30 am to stomach grumbles…caused by my nerves, and gave up in the 4 o’clock hour and went to the bathroom. I crawled back into bed and snuggled up with those amazing pillows and prayed. I had many different conversations with the Goddess in which I asked for strength to get us home. 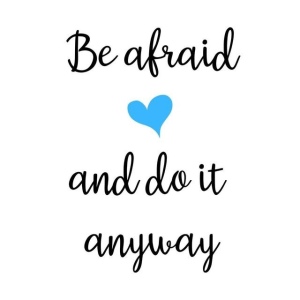 We left at 6am this morning and we arrived at PT’s around 5:10pm. I never even had a cup of coffee this morning. I wasn’t going to risk another explosion with my stomach so I only had water and my vitamins until I got home.

We left at 6am to avoid rush hour traffic and that is tricky when you are traveling through more than one city. I was mostly worried about the Massachusetts Pike because it was so awful on the way in but it wasn’t so bad.  6:30ish Boston traffic is way worse than any rush hour traffic I have ever seen. I did it though…I did it with a ton of anxiety but I did it. Then we went into Connecticut….worst drivers and there were mountains. Then there was this bridge and tunnel….PT had to talk me through that one. I was so happy when I saw the welcome to Pennsylvania signs. Sure there were mountains but the drivers weren’t crazy. We legit went from one side of Pennsylvania to the other. I was never so happy to see familiar roads.

Never in a million years did I think I had that drive in me. I had moments of extreme anxiety but I still got us home. I guess that hour and forty minutes to the Renaissance Faire every weekend  isn’t that scary anymore…Zia

I am just a woman finally accepting that I was never meant to be in the box. I don't fit into any stereotypes, please don't try and label me, that doesn't work either. I am embracing my uniqueness in ways that are new and challenging to me, so that I may continue to grow and never stop learning.
View all posts by dragonflyzia →
This entry was posted in life and tagged bewitched, broom making, emergency room, fear, friends, jolie tea company, road trip, salem massachusetts, travel. Bookmark the permalink.