I tried my hardest to blog last night, the wifi from the hotel would not cooperate. That was an hour I will never get back….so frustrating. I gave up and went to bed early. Two weekends in a row where I didn’t get any writing done. I think I will revamp this plan of attack because clearly it’s not working.

The drive down wasn’t horrible yesterday, I am guessing it’s due to less road construction? The drive down always seems to take forever, thankfully the drive home seems faster. It’s an hour and a half no matter how you look at it.

This was the Celtic themed weekend and there were kilts everywhere. Lots of knee, some of it hot and some of it not… I was surprised there weren’t more kilts…not everyone dresses for a Renaissance Faire.

Spiderman showed up this weekend and even he was wearing a kilt. That is something you don’t see every day.

There was even a wedding yesterday. I heard them talking about it when I walked in but I thought it was just an act. I guess getting married at a Renaissance Faire is a thing. I missed the chance for a photo during the procession but I caught one later in the day. I don’t know what was actually happening in this photo but my guess is….she is already yelling and he is already ignoring her…sounds about right. 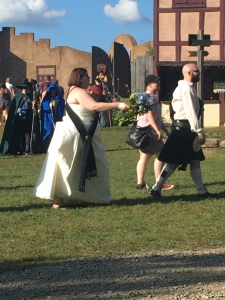 This weekend went slightly smoother. The big Alcon cooler from work worked better than that rolling cooler I returned to Sam’s club and best of all…it’s free. It worked really well for two days and one night but next weekend is three days and two nights. I might have to break down and try food from a restaurant…yikes! I don’t like to experiment too much and don’t relish the idea at all when a port a potty is involved.

That sums up my weekend…it’s not as exciting as I thought it would be. I am meeting some pretty great people and that makes up for it somewhat….Zia

I am just a woman finally accepting that I was never meant to be in the box. I don't fit into any stereotypes, please don't try and label me, that doesn't work either. I am embracing my uniqueness in ways that are new and challenging to me, so that I may continue to grow and never stop learning.
View all posts by dragonflyzia →
This entry was posted in life and tagged blogging, driving, fear, food reactions, kilts, renaissance faire, wedding, work, writing. Bookmark the permalink.

2 Responses to I Tried