Today was a day! The moment I pulled into work and someone was parked in my non assigned parking space….I knew it was going to be a day. When I got to my desk and asked where Not So New Girl was only to find out that she took the day off …was a definite confirmation.

One of the first three patients that I checked in since I was covering Not So New Girl was a total jerk. I looked at the New Girl and said “what the fuck was that? It’s way too early to want to punch someone in the throat?” I then had a new patient give me the stink eye because we require the social for billing purposes. I am just doing what I am told so keep your dirty looks to yourself.

I had to help the girl in optical for a bit and was on my back to the front when I saw Whiskey Contacts come through the door. No way…absolutely not. I stood by the door in M’s room and called to Force of Nature Girl who was intercepted by Whiskey Contacts. Mission accomplished. I can’t stand to be around this woman and her alcoholic energy. She lives off of her mother and drinks her money away, which is why she is always in there picking up sample eye drops. I call her Whiskey Contacts because she was a patient here once and tried contact lenses. She called and asked for an extra trial lens because the first pair dried up in her whiskey glass?

She wasn’t gone twenty minutes when The Pedophile came in. He makes my skin crawl every single time he comes in. He did his time blah, blah, blah….his energy? Is still thick and nasty and when he looks at you….he looks right through you. It always makes me feel a little queasy when he comes in, so I choose to walk away.

I had lots of crabby patients in addition to the freaky ones that I don’t like. Not So New Girl moved her phone from the left of her computer as well as the right. I asked her why she did it and she said it was because she was right handed??? You need your right hand to work the mouse while you are scanning? It was really awkward and all of the cords kept getting tangled…much like her thought pattern.

When I am not sure about a phone call for Big K, I call into her office and ask if she wants them. If she tells me no….I say “okay…one voicemail of death coming right up.” That’s just the way I talk. This is the post it I found on Not So New Girl’s monitor today….

I mean really? It’s not a real thing…just something I say and it required a post it note. Her workspace is littered with post it notes layered upon post it notes. I can’t work in a space like that and once we got past the morning…I worked at my desk and rolled over to her desk when necessary.

We had a woman come to meet her mother who did not have an appointment and was not being transported by the nursing home. She knew by 4:15 that her mother wasn’t coming and her ride still wasn’t there at 5. It never fails….and it’s always a big scene with this family.

Even on the way home today….I was slowing down to make my turn when a car crossed the road. I had to look twice and yes my light was green and it didn’t matter so much for me because I was turning right, but it did matter for the other three lanes of traffic. Luckily this red light runner didn’t cause any accidents. I just wanted to come home at this point.

I came home, did some laundry and The Girl carved pumpkins. She always does a great job… 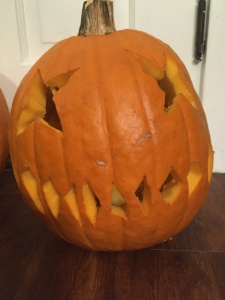 She wanted to try something different and opened them from the bottom which was very awkward. It also meant that I couldn’t put a tea light in there. Luckily I had battery operated tea lights left over from my fairy jar making days.

The only other thing I can say about this week is that I am obsessed with Castle Rock season 2. I didn’t watch all of the first season because it was confusing and didn’t hold my interest. Thankfully season 1 and season 2 aren’t really related. Season 2 is so good! It’s bringing together Misery and Salem’s Lot, and Needfull Things. There aren’t a lot of shows that hold my attention and this one has me hook, line, and sinker….Zia

I am just a woman finally accepting that I was never meant to be in the box. I don't fit into any stereotypes, please don't try and label me, that doesn't work either. I am embracing my uniqueness in ways that are new and challenging to me, so that I may continue to grow and never stop learning.
View all posts by dragonflyzia →
This entry was posted in life and tagged bad energy, carving pumpkins, Castle Rock, daughter, freaky, friday, rudeness, weird, work. Bookmark the permalink.