I don’t know how else to describe the energy this week other than “heavy”.  At first I thought it was just me and I chalked it up to the antibiotics that I started on Monday. It turns out it wasn’t just me, others were complaining about being tired and forgetful. I honestly think it was the full moon/lunar eclipse that was causing it all.

It’s been a crazy week of people decapitating poor little dogs and shooting pregnant cows…and those are just the stories I heard about. People driving into buildings and store fronts. Even the weather is getting in on it. This week has been a doozy!

I had two bright spots this week…the committee meeting for the upcoming literary event and book club. It took some effort on my part to make myself go the meeting. Not because I didn’t want to go but because it was on my half day and I was already home and really didn’t want to go back out. It’s a Winter thing. I’m glad I made myself go, I had fun while we worked.

Book club is always fun, even when I’m not a fan of the book. The Boy in the Striped Pajamas was not my favorite. It wasn’t like reading Kristin Hannah’s The Nightingale where you were into the story and emotionally attached to the characters before it destroyed you. From the word go, I knew this book wasn’t going to end well. To be honest….I cheated and watched the movie on Netflix and skimmed the book for the differences. I had no interest in crying and I thought it would be less painful and quicker to watch the movie. I never do that but I really wasn’t interested in reading the book. It was a fast round of book questions and then we were back to just gabbing. Some Q & A’s go faster than others and this was a fast one.

I didn’t create much more than thoughts this week….lots of thoughts. I asked myself a lot of questions too. Like I said…it was a heavy week. One of the things that I noticed I do and would like to stop is this…. 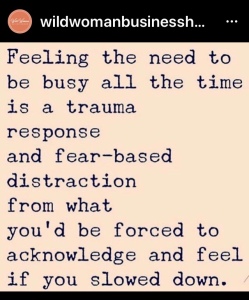 I think the first inkling I had that I was doing this was when I was working the Ren Faire. When I had to prioritize between what “had” to be done and what didn’t. I had a lot of time to think during that 6 week period as well. I am really trying to make the conscious effort to slow down. I wouldn’t call this a resolution because I started it before the end of the year but it is definitely something I am working on,  for me….Zia

I am just a woman finally accepting that I was never meant to be in the box. I don't fit into any stereotypes, please don't try and label me, that doesn't work either. I am embracing my uniqueness in ways that are new and challenging to me, so that I may continue to grow and never stop learning.
View all posts by dragonflyzia →
This entry was posted in life and tagged all the feels, book club, conscious effort, energy, friends, full moon, lunar eclipse, slowing down, writing. Bookmark the permalink.