The last time I colored my hair was April of 2019…probably the first week, maybe the second? April 28th was the day I decided to stop coloring my hair. Mostly it was because the henna/indigo product I was using turned my hair blue. Who knew that would be the happy accident that got me through my transition? Most of it is gone now but people still comment on the blue. It almost acts as a cloaking device for the rest of my hair, because most people don’t even mention the gray.

The first time I met the genius who cuts my hair was July 10,2019. In case you forgot, here are the pictures from the first cut… 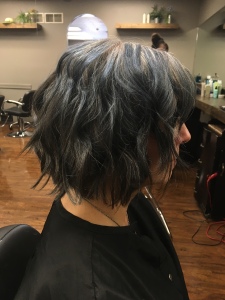 Six months later and this is what my hair looks like…. 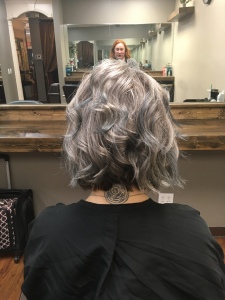 I’m so glad that I picked today to do a photo comparison! I see my hair everyday so I don’t notice the difference as much. The blue is almost gone and I still don’t hate it. I kept reading posts about how hard it is to go gray and knock on wood….it’s been okay. I think the accidental blue helped and the uber talent of my hairdresser totally helped! I can’t even believe it’s almost been a year since I started this journey…time really does fly!

Speaking of time flying…this March will be my five year anniversary at this job? That went fast! Five years means three weeks of vacation and I’m super excited! I already took the week after Thanksgiving, so now I have to pick two more. I will pick one of the weeks during the Ren Faire so I don’t have to work 47 days straight and passive aggressively whine about it again.

That leaves an extra week? There is a writing retreat semi close to my cousin in Tennessee in May and if it coincides with the highland festival in the same area….then sign me up! It’s too soon to tell but it gives me something positive to look forward to.

Work was crazy but most of my craziness was due to the resistance of the Optician. We are now ordering private pay jobs online…aka me, because the Optician + technology = disaster. It looks like a great system and is super user friendly, plus it will make it so much easier to track things. I hope? Today was the first day…so fingers crossed.

I have also done more doTERRA planning than usual. Now that I have M signed up, there are two of us. I am hoping to find different ways and/or venues where we can work together and make this oily adventure happen. Other people do it…why can’t we? This is 2020…anything can happen….Zia

I am just a woman finally accepting that I was never meant to be in the box. I don't fit into any stereotypes, please don't try and label me, that doesn't work either. I am embracing my uniqueness in ways that are new and challenging to me, so that I may continue to grow and never stop learning.
View all posts by dragonflyzia →
This entry was posted in life and tagged doTerra, essential oils, going gray, hairdresser, henna/indigo blue, renaissance faire, small business, vacation, work. Bookmark the permalink.

Beats the Alternative
Learning to write