Does anyone else feel like they are living in an episode of the Twilight Zone? Everything is so strange and out of control. I have heard a couple of references to The Hunger Games but I don’t think we are quite there yet. Every time I see a commercial that is telling me to wear a mask and shows pictures of people compliantly wearing them I yell at the TV. It’s never anything nice. Seriously…go brainwash somebody else. Okay…I’m done….for now.

The first yoga session at work was yesterday and it was a success! My practice has been lacking so I am very much feeling it today. That’s okay I will be stronger next week. MP, the girl who inspired this idea struggled but is coming back next week. She needs this more than any of us, she just doesn’t know it yet. Hopefully next week we will have more people, although…I think we need a bigger space. I have to think on that for a while. Everyone liked it which is a huge plus since I am the only one who has practiced yoga. Fingers crossed that this is a win win for everyone.

I am sending off my cushions tomorrow and am very excited!! I talked to the guy today and he said it’s not that strange to want the backside of the fabric. This is the front…. 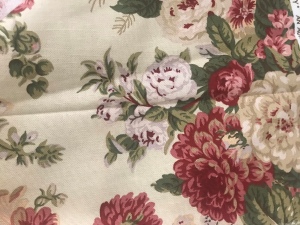 This picture doesn’t show how yellow the fabric actually is and it’s too much for my chair. Not at all the vision that was in my head.

I will be painting the oak an off white while the cushions are away. The girl is against it but it’s not her chair. This is the chair with the backside of the fabric…

I hope it turns out as well as the vision in my head. My $35.00 chair is turning into a $152.00 chair which is still a great deal, especially since it’s customized to my wants. I love to upcycle things more than anything else! Which started another conversation at work.

The big boss bought a new car. I couldn’t tell you what kind it is because I never pay attention to those things. It’s a pretty platinum color, that’s all I can tell you about it. One of the nurses walked in with me Monday and said “that is one snazzy car, I’m sure it cost more than your house.” I don’t understand that line of thinking? Why can’t you just say it’s a nice car? What difference does it make how much it cost? He works hard for his money, why should he be criticized for it?

Yesterday we were at lunch and Big K was talking about getting a new car, which led to a conversation on how pretty the Big Bosses car was. I said “I still want a truck.” Big K said  something about a type of truck and I just looked at her and she said “you really don’t pay attention to that stuff?” “Nope…I just want a small truck to haul things. 4-wheel drive would be nice and it has to be reliable. I don’t care what kind it is.” Is that strange?  I really do want a truck though. It will make it easier to upcycle the world…

I went to drop things off at my aunt’s today. Next week they are going to visit my cousin out of state and I still had last year’s Christmas present for them. (the upcycled mason jar bird feeder) I was hoping they would trek out the route for me and tell me how mountainous the drive would be but they are going a different way. I am seriously considering making the trip to Kentucky and then South to visit my cousin but…we all know how much I stress around the mountains. Plus it’s a really big drive to take by myself. I am still thinking about it….Zia

I am just a woman finally accepting that I was never meant to be in the box. I don't fit into any stereotypes, please don't try and label me, that doesn't work either. I am embracing my uniqueness in ways that are new and challenging to me, so that I may continue to grow and never stop learning.
View all posts by dragonflyzia →
This entry was posted in life and tagged fears, Kentucky, masks, mountains, travel, twilight zone, upcycle, work, yoga. Bookmark the permalink.

2 Responses to Love to Upcycle