I had quite the productive weekend! I also had quite the klutzy weekend…I did all of my running around Saturday morning before the girl even got out of bed. I even stopped at two garage sales, one of which had a gravel driveway. The husband was carrying out my Christmas ornament totes (mint for $3.00 each) and I turned to look at him and must have hit a big piece of gravel because I went down. He was mortified! I was fine, my knee didn’t even hurt the next day….I was lucky. Now when I take down the Christmas ornaments this year, I can put the Boy’s, the Girl’s and my ornaments in separate boxes so when they are ready to go…it’s ready.

After that fiasco I came home and grabbed the Girl. We stopped at the ReStore and then headed to our favorite coffee house. I bribed her with a coffee after we passed a big garage sale. It was worth it though…I found a Fossil purse in gently used condition for $2.00!! I also bought a couple of cute flat sheets, which helped me decide of my vacation projects. Making soap and pajama bottoms. How many years has “learning to make pajama bottoms” been on my list? Too long to remember so this time I am going to do it!

The Girl wanted to check out school supplies so after our swim with the neighbors we ran to Office Max. There weren’t any spectacular deals but she should have what she needs. We weren’t out long because we had plans with the neighbors. The invited us to go sunflower picking. I have never been but it sounded interesting and it got us out of the house. Plus it gave me a chance to play with my camera. I would post more but I still have to go back and delete some old pictures. After 8yrs, I have no room left. 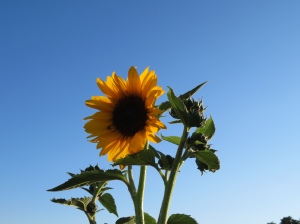 I have never been to a sunflower patch before and was amazed by the bees. The flowers were covered and I walked through, brushing up against the flowers and the bees didn’t care at all. I would definitely do this again! I had fun playing with the angles and the light….I have no idea what I am doing but it’s fun.

Later that night I tried to have a little fire in my fire pit. I was using the wood from a recently cut down tree. It was too green and I should have known it would be. I gave it my best shot though.

I woke up Sunday and started on the canning. One of the local small business growers had a special on “use it or lose it” tomatoes and peaches on Saturday so I bought both. I made a batch of salsa and my second batch of vanilla peach butter. This picture shows the canning and the two bouquets I made out of the eight stems I bought Saturday at $2.00 a pop. I blame the Girl…she kept pointing them out, I was only planning on buying five stems.

I finished canning and making my lunch for the next couple of days and then I started carrying out my dresser drawers. I have one dresser that seemed to have a “smell stuck in it” I think it might have been from the Spring floods I used to get at the old house in the basement. So I took them outside to sit in the sun…the best purifier. I also made an alcohol spray full of essential oils and sprayed them down…twice. I touched up the paint and painted the drawer pulls a new color.  When I order this print…

The one on the right from Jessica Galbreth (the angel) it came wrapped in the most beautiful floral tissue paper which I decoupaged onto the sides of the drawers. I would have posted a picture but I have to delete more first. It was pretty late when I finished the drawers and then I started dinner which was super fast. We had grilled cajun chicken on the grill that I cut up to go in salads. Easy peasy.

I was still cleaning up the kitchen when the Girl called in from the living room “Frontrange Scribbles mom.” My alarm went off and it’s funny that she still remembers that name. It’s been Frontrange Radio for quite some time now. There was great music playing while I finished up. I had every intention to blog last night but I was still doing stuff well after 10pm.

I still have a large hamper full of clothes from my drawers that need tried on and washed. I previously made sachets using Downy unstoppables which is worse than the old wood smell. I was going to reuse the sachets using rice and essential oils but I couldn’t get the poison Downy smell to go away so I will have to get/make some new ones.

I opted to start here instead of there since I have been extra productive as of late. I know I won’t get all of it done and yoga is after work tomorrow, so it might not be until Wednesday when I finish that dresser up.

I am just a woman finally accepting that I was never meant to be in the box. I don't fit into any stereotypes, please don't try and label me, that doesn't work either. I am embracing my uniqueness in ways that are new and challenging to me, so that I may continue to grow and never stop learning.
View all posts by dragonflyzia →
This entry was posted in life and tagged bees, canning, daughter, deals, garage sales, nature photography, neighbors, sunflowers, upcycling. Bookmark the permalink.